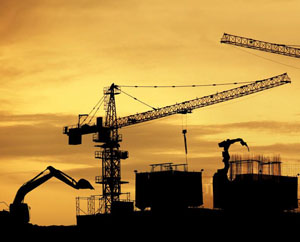 This year, construction CFOs are simultaneously dealing with two key industry trends: more demand for green building and higher costs for materials. Here are the challenges they’re facing and the steps they’re taking to address them.
The higher cost of going green

Demand for green building projects has moved steadily higher in recent years. As of 2017, certified green offices represented 38% of the commercial office space across 30 markets, up from less than 5% in 2005, according to real estate firm CBRE. And by at least one measure the trend is expected to continue: The global market for green building materials is projected to increase by 12.5% annually through 2019, according to a report by Transparency Market Research.

While green building can be great for the environment, it presents some challenges for the firms undertaking these projects. For CFOs, a key concern is its complicated financial calculus. As builders increasingly opt to use renewable and alternative materials, firms must contend with the premium prices attached to many of these products—and to the labor involved in using them.

“The increased cost to install the green products often exceeds the payback from the customer,” said Jeremy Teicher, chief executive officer of Build Within Reach, a residential builder in Englewood, N.J.

Your Dream Home is Within Reach
By Elizabeth Kratz

Builder Jeremy Teicher bought a century-old house in Englewood intending to replace it with a new home. But instead of just demolishing the old house, he had it dismantled, so the pine floors, beadboard ceiling, solid oak doors and other features could be reused or recycled.

Kevin Henderson, left, and Harvey Burrell removing the floor of an Englewood home that was being replaced. The ‘deconstruction’ approach allowed the lumber to be donated to Habitat for Humanity and reused.

“It’s good for the environment, and we believe it’s the right thing to do,” said Teicher, a principal with the Englewood construction company Build Within Reach.

Like Teicher, a growing number of builders, architects and homeowners are looking for ways to recycle building materials, even though it’s generally easier and faster to just haul everything to a landfill. The environmental benefits are obvious, since the U.S. Green Building Council estimates that 10 million tons of construction and demolition debris was dumped in 2003.

But saving these old building elements can also make economic sense, because they can be resold, donated or reused to save the cost of buying new items.

To dismantle the old Englewood house, Teicher hired a crew from a Baltimore non-profit, Humanim. Interviewed at the house recently, Chris Posko, an operations manager for Humanim, said that 80 to 85 percent of a home can typically be saved.

“There’s value in everything,” Posko said. “To be able to get over 1,000 square feet of heart pine flooring [from the Englewood house] is beautiful.” Part of Humanim’s mission is to hire and train the unemployed to do the deconstruction and build their own work record.

Posko said demolishing a typical house costs $15,000 to $20,000, while deconstructing the same house takes more time, and might run $25,000 to $30,000. But the materials are donated, providing a charitable deduction. That deduction covered the extra cost in the Englewood job, Teicher said.

Humanim donates building materials to Habitat for Humanity, the home-building charity, which sells used furniture, building materials, carpets, appliances and more in its ReStores, including one in Wayne. The ReStores have three missions: to raise money for Habitat, provide affordable items for the community and reduce the amount of waste dumped in landfills.

The ReStore in Wayne, in the Wayne Hills Business Campus on Hamburg Turnpike, raises money for Paterson Habitat. It contains a wide assortment of products, including kitchen cabinets, appliances, furniture, carpet remnants, lamps, hardware, piles of tiles — everything, including the kitchen sink. All are at least 50 percent off retail price, and furniture prices are cut the longer an item stays in the store. For example, a maple dresser that’s now $75 will drop to $60 after 30 days, and $38 after 90 days.

“If they take the cabinets and fixtures out carefully, we can reuse them,” Fitzgerald said. Appliances are in great demand: “We can’t keep appliances in stock. They fly out of here. Same thing with good-quality cabinets.”

Although the store’s only been open about a year, Fitzgerald estimates it has kept 17 tons of stuff out of landfills. About three-quarters of the shoppers are homeowners, many of them surprisingly affluent, according to a poll the store did.

“Everybody loves a bargain,” Fitzgerald said. “We have treasure hunters. We have dealers; they paint the furniture and sell it. … Good old furniture can be refinished multiple times. It’s a sin to have it go away. This kind of old-growth wood — you’re not going to see it again.”

One recent morning, Mildred Balmer of Paterson was shopping with her three grandchildren, looking for furniture, including a bunk bed.

The store helps “people who are not able to buy new,” she said. “I don’t think it’s right to put good stuff in the Dumpster when someone can use it.”

Green Demolitions, a Connecticut non-profit that has a 43,000-square-foot store in Fairfield, also offers tax deductions in exchange for donations of kitchen cabinets and appliances, as well as other building materials. One recent day, the Fairfield store held furniture, including a dining room set for $800, and a number of kitchen cabinets and appliances, set up in room-style displays. Complete kitchens, mostly in very good condition, were generally priced between $2,000 and $7,000. The store also offered tubs, sinks, faucets, bathroom vanities, ceiling fans, chandeliers, windows and doors.

Green Demolitions’ founder, Steve Feldman, said it has recycled more than 2,500 kitchens since 2005. Because its profits go to fund addiction recovery efforts, homeowners or businesses that donate kitchens can get a charitable deduction. Green Demolitions also has a related, for-profit arm to sell luxury kitchens, usually on consignment. The Fairfield store is Green Demolitions’ only retail outlet, but many of its customers buy used kitchens on the Internet.

“We actually have more buyers than product,” Feldman said. “Every nice kitchen that comes in goes right out the door.”

Green Demolitions doesn’t install the kitchens. Fitting a kitchen designed for someone else’s home into a new space takes extra skill on the part of kitchen designers and contractors, Feldman said.

“Not everyone wants to do the retrofit; it’s like fixing classic cars,” Feldman said. “It’s a niche.”

Reusing materials can help developers and architects achieve LEED (Leadership in Energy and Environmental Design) certification from the U.S. Green Building Council. Westwood architect William Martin said he tries to reuse materials whenever possible when he does renovations. For example, he plans to reuse the eight-panel interior doors — difficult to find nowadays — in the extensive renovation of a Cotswold Tudor in Ridgewood. He also tries to save and reuse exterior brick or stone when adding on to a home, so the new section blends better with the old. And when a client is redoing a kitchen, he suggests selling the old appliances and cabinets, if they’re still usable.

Although reusing materials generally involves more labor costs, it also saves the cost of buying new materials and disposing of the old, he said.

“People are really receptive to it, especially when they realize they can get the beauty and save some money along the way,” Martin said.

“The wood was longleaf yellow pine, which you can’t even get these days,” Vierheilig said. Reusing the old wood, he said, supported the commission’s goal of “environmental stewardship and sustainability.”

As for the Englewood house, previous owner Yaffa Regosin said she was glad to see its materials being reused, because she and her husband had put a lot of effort into renovating the house.

“I was pleased,” said Regosin, a real estate agent with Miron Properties in Tenafly, “because I felt like all the hard work was not going into the garbage.”